“Success is due to our stretching to the challenges of life. Failure comes when we shrink from them.”

These words of John C. Maxwell are apt to describe a man’s journey from pain and discomfort to heartfelt success. Lance Armstrong needs no introduction. A world famous athlete who rode his bike a record seven consecutive times between 1999 and 2005 at the Tour de France.

The book discusses Armstrong’s life and how he struggled through cancer and emerged victorious. At the age of 25, Armstrong was diagnosed with testicular cancer. Then, in its final stage, the cancer had spread all over his body. The ten chapters in the book take the reader through three different phases of Armstrong’s life - how it was before cancer, with cancer and finally after cancer.

The story unfolds in the chapter “The Start Line” where Armstrong describes his love for acceleration in any form. It talks about Armstrong’s transformation from a young amateur bicycle rider to a professional world champion. Cycling is a competitive sport and winning the Tour de France was a dream of every rider. Despite a few initial setbacks, Armstrong was determined to win the upcoming Tour de France and realized that there are no shortcuts to success.

The way in which Armstrong connects every following chapter with the succeeding one is commendable. The chapter “Conversations with cancer” is bound to bring tears to your eyes. In these testing times, it was Armstrong’s mother Linda who proved to be the greatest pillar of strength for him. Perhaps, the reason Armstrong has come forward to share his cancer experience is because people don’t lose hope however bad the circumstances may be.

At the end, Armstrong’s success couldn’t have been possible without the constant support of friends like Bill Stapleton, his team mates, doctors and nurses at the hospital, his wife Kik (Kristin Richard) and son Luke. After surviving cancer, Armstrong evolved as a more compassionate and considerate person starting his own cancer organization - Livestrong – to help cancer patients physically, mentally and emotionally.

If there is one word to describe the book it would be “Inspiring”. As the book title suggests, “It’s not about the bike” - and it is certainly not. It’s about a man whose sincere dedication and strong will power helps him overcome one of life’s biggest challenges. The book teaches readers the importance of appreciating each and every moment of their precious lives, especially recommended for ones who have struggled courageously through their hardest battles and came out triumphant. 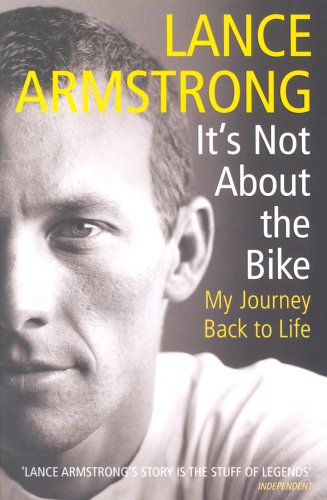